Download Add to Lightbox Buy Image
Image 1 of 1
Thoughts from the Past - Crosby Hotel Window, H7301 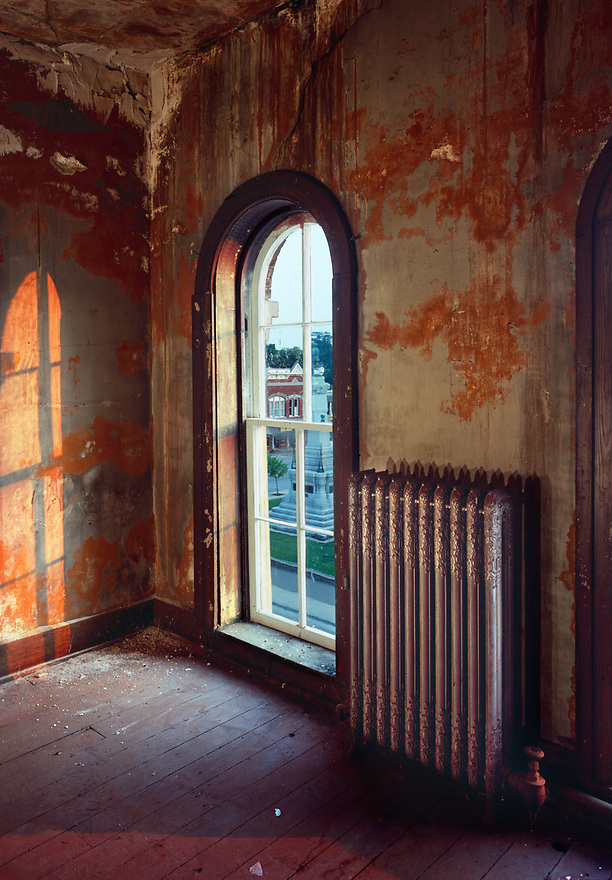 Crosby Hotel Window – Thoughts from the Past

In 1866, the Brookbank building was built next to the Delphi Opera House, one year after it was constructed. In ’82, an agreement was made with the Opera House to put in a doorway between the Opera House stage and the 4th floor to provide dressing rooms for the performers. James Whitcomb Riley’s first performances at the Opera House was in ’82, so one might imagine him using this room.
This front room was probably used as a green room for the performers with the dressing rooms down the hall, where signatures/graffiti by the actors can still be seen today.
Crosby became the owner of the building in 1912, adding the tin ceiling in ’14, and steam heat in ’16. Sometime after the Opera House closed in 1914, the access door was plastered over, but the location can still be found today.

This was an interesting image for me to create. It was produced with both analog and digital techniques. I wanted to attain the size and quality of a large format camera, but I needed to use digital techniques to overcome the huge dynamic range of light.
In this case I took two shots with Velvia 100 4x5 film. The primary shot @f16 was exposed on the inside for 4s, while the second f16 exposure was ½s was used for the outside. After developing, I did a wet-mount scan of both pieces. The second exposure was then layered onto the first in PS and careful and appropriate edits were applied. The final master file is over 450MB which would allow for a large print.
©Alan McConnell
Somewhere in Time
Delphi, Indiana, Delphi Opera House, Crosby Hotel, large format photography, color photo